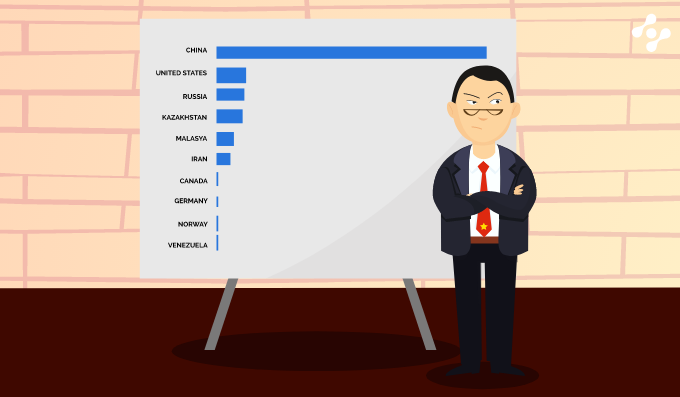 This is the second of our articles in the recent crypto-crash. The first one explained how the community’s dependence on Elon Musk left them in a weak position when he proved to be a fickle ally.

Now though, we continue the story with China and the recent regulatory moves. In a joint declaration on the People’s Bank of China’s WeChat account, financial and web entities stated merchants should not accept crypto as payments, or even provide services/goods related to them.

This is nothing new, China has been controlling Bitcoin for years!

But for now, let’s just say that China had arranged matters so that the Chinese people could only mine and sell Bitcoin, not majorly use it to transact, or buy it for themselves. In other words, China has syphoned billions of dollars over the years from the US and provided cryptocurrencies instead, while keeping their economy relatively untainted from crypto tech.

The reason for this is simple, the Chinese government has been developing, and is already trialling their “Digital Yuan” - a central bank digital currency - so the last thing they want is for a decentralized version of that to spread among their population.

If markets were purely rational, and weren’t thinking that the rest of the world will copy China, they might well see this as good news.

Firstly, many of the world’s major crypto mining operations are in China - if they get taken out of the equation that would be a supply shock, which basic economics knowledge would imply that this would cause the price to increase, as all other things being equal the demand is still there.

Secondly, “the West” - and especially the US that sets the regulatory tone - often do the exact opposite of what their geopolitical rivals do: “If they’re communists, we’re capitalists”; “If they’re atheists, we’re religious”; “If they live under tyranny, we are the freest”; this could go on but you get the picture, and yes the American perceptions of what they are vs what they aspire to be are often quite different.

Nevertheless, there is definitely that contrarian trend in the country, and they’re not exactly likely to give that up any time soon. The EU and the UK, while at times reluctant allies, do dance their regulatory tune in financial matters - think of regulations like FATCA, which bind foreign countries to tell the US the details of their American banking customers, but the US isn’t necessarily obligated to reciprocate.

The point is that there is reason for doom and gloom - regulation is definitely coming to the crypto space, as many central banks have already mentioned. But that doesn’t mean that you can’t prepare preemptively.

The CRD Network, for instance, is a DeFi environment that is being explicitly designed to be regulatory compliant. It uses the advice of the WACEO, a non-profit blockchain legal advisory organization, to design and implement systems that meet the legal requirements.

In other words, when the crackdown does happen, and even if it were to spread throughout the world, we are ready. We are already implementing a compliant ecosystem that will meet even the strictest criteria. So when the regulators go after crypto, we will be on their good side.

We live in very dynamic times, where a tweet by a single man, or an announcement by a country a world away has a radical effect on our lives. The best we can do is to prepare for the challenges we will face, and the CRD Network is building an ecosystem that will allow you to do just that.