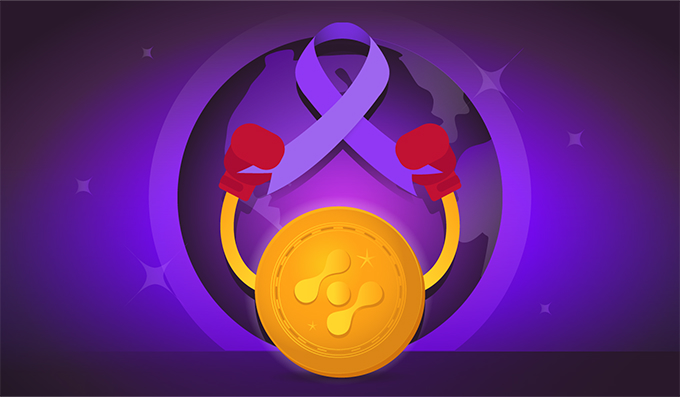 I’ll grant you that the title seems hyperbolic, clickbaity and in poor taste but we really do mean it. In this article, we’ll discuss how the leading cause of death in the world might be eliminated through crypto.

Cancer is not a common disease, it’s a collection of ailments that produce malignant cell growth and there isn’t one single factor determining it. This is why it’s been so difficult to find a cure for cancer because in a way every form of cancer is unique. We’re not talking about curing a single problem, but a whole genre of hundreds of diseases.

Furthermore, our pharmaceutical systems are simply not designed for the era where easy solutions are no longer available. The easy fruit in medicine has mostly already been picked, which means developing novel treatments and cures for conditions is comparatively more expensive than it used to be.

Let’s put it this way, back in the day pharmaceutical companies primarily did their research in-house. Meaning that they spent the money to develop the medical sciences, now though most of their advances come from acquiring smaller firms. In other words, small biotechnology firms raise funding from private investors, bet on a risky proposition, because they have no other choice, and then get bought out by big pharma companies if they actually discover something that is worthwhile.

It’s pharmaceutical Russian Roulette, if you win you get a billion-dollar paycheck from major healthcare companies, if you lose you go bankrupt.

In other words, big pharma companies are outsourcing risk, and have been doing so for a while. They’re letting small players do the research they should be doing in the company and then buying them out.

Now, in the world, there are many so-called “orphan diseases” meaning that they’re rare diseases where there isn’t enough economic incentive for labs to ever think about developing a cure and expect a good return on investment. But what if research could be conducted irrespective of a profit motive?

That’s where crypto crowdsourcing comes into play. Presently, there are websites like BitClout, which create tokens for Influencers and Projects, and people can support these creators financially. The CRD Network is in the process of developing a marketplace for these tokens, which expands their functionality by being able to take out collateralized loans with these Creator Tokens, or short sell them and gain money if a project is unsuccessful.

However, there is no reason why these technologies should just be used for influencer drama. After all, they are powerful tools for providing financial resources around the world for specific projects. Why couldn’t they be used to fund scientists with ideas on how to treat illnesses but not enough funding to test those ideas out?

Now, imagine if the proposed cures for this disease could be funded, much as you might crowdsource a videogame. Moreover, imagine if you could build financial instruments that compiled these proposed solutions ranked by how heavily each project is shorted. In other words, you are essentially using the wisdom of the crowds to deploy funding in the best way, rather than what is immediately profitable.

To quote a study published on The Lancet Global Health by DimitriosGouglas Et al. the cost of developing a treatment for diseases “Accounting for probability of success, the average cost of successfully advancing at least one epidemic infectious disease vaccine through to the end of phase 2a can vary from US$84–112 million ($23 million–$295 million range) starting from phase 2 to $319–469 million ($137 million–$1·1 billion range) starting from preclinical.”

If most of the people with chronic conditions would be willing to chip in at least $1 to find a cure to their ailment, those numbers suddenly look very reachable. Over time, you could address each and every disease out there. And while we’re at it, let’s say that as a precondition to receiving your funding, any discovery made in the labs has to be made open-source, meaning that treatment would instantly be cheap and freely available to all.

Imagine owning the token of the project that cured cancer, this would be a heck of a collector’s item! That’s definitely something worth displaying proudly on your wall, and on your social media, not an algorithmically created Cryptopunk worth several million dollars.

In other words, you will be able to have both collectors and people genuinely wanting projects to succeed putting their money for a singular purpose - the eradication of diseases.

The future doesn’t lie with large pharmaceutical companies, they already outsource their research and development to risky projects with an uncertain payoff. The next logical step is to expand the potential places that can conduct research without an expectation for profit.

The CRD Network, with the creation of secondary markets for tokens and enabling the development of crowdfunding projects has great potential to change the world and make it a better place.